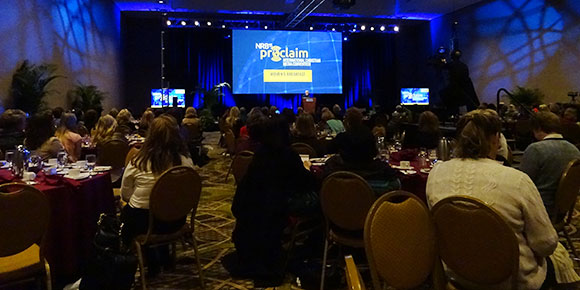 Encouraging women and providing them with biblical guidance has always been paramount to June Hunt. What better way to express this passion than for Hope For The Heart to host this year’s Women’s Breakfast at National Religious Broadcasters’ 2015 International Christian Media Convention in Nashville, Tenn.

Hunt, along with more than 250 women (and a few brave men) gathered for a morning filled with inspiring messages of faith and soul refreshment. Sharing her personal testimony, Hunt told of her upbringing in a dysfunctional family and how God used those circumstances to guide her into a life dedicated to serving others with Christ’s hope and healing. “Most people, even Christians, don’t realize that Scripture is packed with God’s truth and guidance on a multitude of life issues,” shares Hunt. “No matter what we’re dealing with – anger, depression, forgiveness, self-worth, verbal abuse or any other circumstance – God’s Word offers wise counsel for us to embrace and put into action.”

Also included in Hunt’s address were her concerns for the rapid rise in domestic violence, both in the U.S. and around the world. “Many of us would be shocked to realize that 1 in 3 women are abused worldwide. It is very likely that a close friend, neighbor or even a sister is currently being abused, and you don’t even know it,” shares Hunt. “It’s much like the old song lyrics: ‘No one knows what goes on behind closed doors.’ For many women, their secret will never be told because they often feel ashamed or responsible. For some, their abuser has threatened them that worse will happen. No matter the circumstance – there is no excuse for abuse.”

Also joining Hunt as speakers at the NRB breakfast celebration were Mariam Ibraheem and syndicated radio host Janet Parshall. While Janet shared a powerful devotional message, Ibraheem was honored for her personal story of triumph over persecution.

Imprisoned by her government in Sudan for crimes of adultery and desertion of the Muslim religion and its principles after marrying Daniel Wani, a Christian, Mariam underwent tremendous physical and emotional strain. Her punishment included being sentenced to 100 lashes, raising her first child in prison, giving birth to her second child while in chains, and being denied medical treatment. In May 2014, she was sentenced to death unless she recanted her Christian faith, but she refused. After much negotiation, Mariam was released to the American Embassy and allowed to leave Sudan.

“Mariam Ibraheem is a modern-day example of what it means to not be ashamed of Christ,” noted NRB President & CEO Dr. Jerry A. Johnson. “We are honored to welcome her to NRB 2015 as we rejoice with her over God’s protective care of her life.”

Listen Online
Hope In The Night
Find a Station

This FREE booklet gives you insight into God's heart on stress, anxiety and fear.